AVAILABLE NOW FROM THE PUBLISHERS:

There is no reversal, no going back! That “second removal,” a mass migration from the Caribbean colonies of young men and women coming to help the ‘motherland’, to make their way in life and even to make their fortunes. The “first removal,” that forced migration out of the continent of Africa and into the Americas, the Atlantic Slave Trade. Again, there is no reversal, no going back.

In this thoughtful and entertaining work, Call of the Twice Removed, the author looks at the true legacy inherited from these two removals. We get a chance to see the real lessons to be learned from Pan-Africanism, nationalism, socialism, Christianity & religion in general, the Black Muslim movement and from traditional and spiritual Islam. The beauty of this book is that after helping us understand what has gone before, the author then indicates a positive way forward for those who dare to claim their inheritance. With such an unquestionably unique heritage it becomes blindingly obvious that the the black man and the black woman have a very significant role to play in positively shaping the future of Britain, Europe and well beyond these shores.

Much too often black people (and others of course) are expected to answer or give thought to version of the the “identity question” Am I English? Am I British? Am I African? Am I African/Caribbean? Am I mixed race or dual heritage etc. Now we’re forced to add into the mix; Am I Christian or Muslim, practicing or not, backward traditionalist or modern liberalist? etc etc.  The real trick is not to get sucked in. For other people are only to ready and quick to define you anyway, no matter what comes out of your mouth. Then through the media each of us is already extensively programmed to be wary of certain answers or views. X means “chip on shoulder.”  Y means “extremist views.” Z simply means “old fashioned and outdated bigot.” 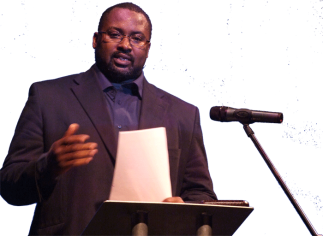 In his popular book, Outliers, Malcolm Gladwell clearly demonstrates that our “inheritances” certainly tend to play a part in who we are and what we do in life. In this book, Call of the Twice Removed,  Amal Douglas, shows us that both despite, and because of what we have inherited from our nearer and further forbears, any one of us can escape the restrictions of our “historical selves” and in so doing embrace the unique opportunities which that legacy affords us.

The author was himself born in the UK of Jamaican parents and schooled in the UK until age thirteen when the family moved/returned to Jamaica. He spent many a long hour working in the family businesses, alternating between shopkeeper, bartender and bus conductor. After high school, university and time as a very young civil servant he returned to the UK as part of his own personal second removal. He became Muslim over 20 years ago and has been for many years at the forefront of the movement to re-introduce gold and silver as currency (particularly the Islamic Gold Dinar & Islamic Silver Dirham).

After continuing his professional accounting studies he held various posts in that profession and ended up in the city.  His first solo business venture in the UK was as a travel and shipping agent in London’s West End. Since then he has had a varied and colourful business career that spanned wholesale distribution, production of health products, computer sales, telephony services and event production & management.

All this has proved invaluable in his current role as an enterprise and fundraising consultant in which he advises major UK & international charities & NGOs, SMEs, new business startups and numerous trade bodies and  organisations. He has developed and delivered numerous training courses, some of which can be found online at Anglia Mu’amalat College and School of Business & Enterprise. He always finds the time to continue his longstanding practice of teaching mathematics, business studies, Islamic studies and English to both children and adults. His work has taken him to across Africa, the Caribbean, North America and throughout Europe.

As an author he has written several books and countless articles, and also wrote and produced the play Diary of a ‘Son of Africa.’  Hajj Amal is Founder of the Open Trade Network, an original member of the League of the Black Stone, a respected community leader and activist, and has served on the board of many charitable, social and strategic organisations & enterprises. He had a key role in setting up the Norwich Academy and both taught and served as the Director of Finance.

With such a background it is no wonder that this book is unique in it’s approach and insights. The author doesn’t tell us to seek or ask for a seat at the table, it’s their by default! He doesn’t make an apology for slavery, neither does he feel the need for any reparations or apologies from others. He doesn’t propagate religion but we get a clear indication of his own journey to Islam and spiritual self-awareness, and how he sincerely wishes each of us to make our own inward journey of a similar or greater magnitude. Not solely so that individually we each become better people, but more importantly, so that we can contribute to making the places where we live better for ourselves and those who follow us.

Call of the Twice Removed: The Necessary and Unique Role for the African/Caribbean in the Future of Europe and Beyond

Paperback Version AVAILABLE NOW DIRECT FROM THE PUBLISHERS: and also on Amazon

eBook Versions available from Amazon (kindle/mobi) and  Smashwords (epub/iBook  and other versions):